[Private] Standing On The Edge Of The Crater

[Private] Standing On The Edge Of The Crater

Ever since that first night there a few weeks ago, the bar had become a regular location for Inna. After the move to Japan, the readjustment to her new job and all the stress that came with it (and after it), the young woman had forgotten just how much she liked to have fun. She never drank too much, of course, just enough to keep her good mood going. No, what she truly enjoyed there were the people. Inna was, after all, a rather social person - just like a manager ought to be. And despite the stereotype of bars being full of drunkards and creeps, most of the people she met were just like her. They were upstanding citizens who just wanted to get away from everything and enter a whole new world for a few hours in order to unwind. Inna spoke to quite a few different people during her visits - some, like her, were regulars. Others left a lasting impression despite only visiting the place once. Either way, the woman loved every moment of it. And whenever she learned that Ellie would have guests over, or was invited to a slumber party or anything of the sort (which was actually happening more and more frequently now that Wade was back and the little girl could shrug her depression off), Inna immediately headed towards the bar. She would be the first to admit that she was addicted to it.

Tonight, though, was a bit more boring than usual. Not a single one of the regulars Inna knew was around, and the rest of the bar patrons didn't pay any attention to her. And honestly, she didn't really feel like talking to any of them. Two seemed like close friends who were already engaged in a passionate conversation about something, and the third one had laid his head on top of the table he was sitting at and staring off into the distance. Hell, not even the bartender seemed too keen on talking, with his eyes stuck on the screen of his phone. Inna sighed, tapping a few times on the bar to attract his attention and order another drink. If nobody approached her by the time she finished it, she was leaving. 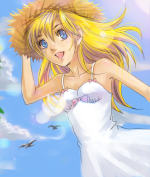 Re: [Private] Standing On The Edge Of The Crater

"Excuse me miss, would you mind me sitting here?"
Nathaniel stood by an adjacent barstool, wearing a sharp slate-colored suit. Although he wasn't much for drinking, the bar was a convenient way to kill some time and meet some new people. 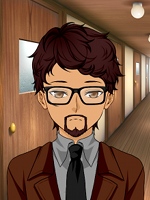