(PRIVATE) Why must you always be right...

(PRIVATE) Why must you always be right...

(Chris ventures deep into the woods until he spots his mother (Sarah Cook). She is wearing a purple yukata, and she is also without shoes. There are also several men in suits with her: likely for protection. Chris gets on his knees and kisses her pale, gentle feet upon first seeing her.)

*Sweetie, stand up. I'm no deity. (She giggles at Chris's sign of respect. As Chris promptly rises to his feet, his mother lays a kiss on his right cheek. Once she is done smothering her son with affection, she wastes no time in addressing the problem at hand.) How are you enjoying your time at Yamaku, sweetie?*

It's fun... (As Chris gives his rather vague response, his mother looks at him with intent eyes.) Okay, I've made several friends... and I kind of have a girlfriend now...

(Chris' mother is giddy with excitement for her son. She gets right up to him and begins slapping him in the back repeatedly.) *You've done it, son!!! (She stops slapping Chris on the back and asks her next question.) How's Rachel holding up? I realize she hasn't been hear as long as you have... (Chris cuts his mother off.)

Rachel has a boyfriend already, mother.

*(Chris's mother is now shedding a few tears.) You're both growing up so fast... (She sniffles a few times. One of Sarah's bodyguards taps her on her shoulder and tells her that they must all be leaving. Sarah dries her tears and places both of her hands on Chris' shoulders.) You keep doing what you're doing, Kamanchi. I might just have to meet this girlfriend of yours in person, once the drama back home subsides of course. And another thing: don't pull another stunt like the one at that zoo you were at the other day. (She shares a passionate, yet still rushed hug with her son and the two part ways. Chris makes his way back to Yamaku to rest for the night, battling with his inner thoughts along the way.) {You come all this way just to talk to me for a few minutes!? How the fuck am I supposed to explain what I am to Sumiko and Rachel!?} (Once he arrives at his dorm, he slams the entry door upon entering. There, he cries himself to sleep.) 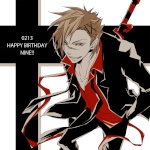 Similar topics
» [Private] Getting a "Leg" up
» [PRIVATE] Outside
» (Private) Man to Man
» (PRIVATE.) Tell me a bit about yourself?
» [PRIVATE] Visitation Time