{Open} The Much Less Fatal...Manly Dinner

{Open} The Much Less Fatal...Manly Dinner

Kiyonori had felt awkward going into this store ever since he'd moved here because of his height he'd often been confused for a student from Yamaku Academy, but he just did his best to not let it bother him.He browsed the store for some of his favorite "Guilty Pleasure" foods which consisted mostly of what other would simply call Junk Food. The only reason he felt he could eat like this and get away with it was the simple fact that his wife was out of town for the next 3 or 4 days for a medical conference, and as such he'd decided to have have some "Manly Dinners" as he liked to call them. The rules were simple, eat what you want.
"Miyoko would kill me if she knew I was eating like this, still you have to indulge once in a while right?" he said to him self as he placed a bowl of his favorite instant Udon in to the shopping basket he was carrying. 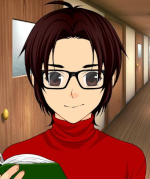