Sayuri nods. "Maybe. Since I can't really do kendo any more, it might be good to pick up a new hobby." 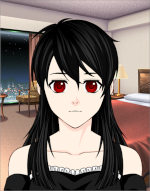 Kendō, huh?
Wouldn't have guessed. Obviously, that would be difficult for her now…
So I guess her condition is something recent, or has gotten worse over time…

He frowned briefly as he considered the parallel with his own situation.

Probably not the best thing to dig into right now.

"You know, with as much talent as we have here, we should really all get together and play sometime.
Could even start a band."

"Sounds like I need to decide on an instrument then. That way I can join too." 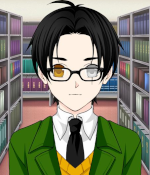 "Well, we'd have a drummer, a few guitarists, a pianist or two… anyone sing?"

[Who's which one is senpai? Me? I'm already the drummer.

I clear my throat and slowly raise my hand.

Another pianist, huh? Maybe I'd be able to learn some more too.

"Yeah, set is difficult enough to concentrate on by itself…

"What about you, Matsura?"

Haven't heard twenty words from him since we got here.
Although maybe that's okay.

[Yep, I'm his senpai. But I can't exactly respond right now because Wade isn't even around, he's in the kitchen]

Kaim kept his passive expression. He honestly had no clue what musical ability he had.

"Unless I have a latent talent ready to be awoken, I'm not musically gifted in anything to my knowledge."

Wonder what's taking so long on our drinks…

Having been quiet for a while, Chiharu decided to lean forward to look past Toshi and at Kaim as she said, "Couldn't hurt you to try."
<It could hurt me on the other hand, but that's not the point>

Kaim thought for a moment.
"I suppose I could dabble with some instruments another day to see what happens."

All of a sudden, a loud noise blows out through the speakers of the restaurant.

'LET IT GOOO! LET IT GOOOO! CAN'T HOLD IT BACK ANYMOOOOORE! LET IT--'
'Damn it, Wilson, have you lost your mind? The mic is on!'
'It... It is?!? Oh sh-- I-I mean... Nous nous excusons pour la gêne occasionnée! Nous serons de retour après ces messages! Ding-dong!'

I've been idly looking around a bit, thinking of how this place seems pretty formal and wondering how many times I've even been in a formal sort of place or situation,
and my thoughts are cut off quite abruptly as someone decides that he doesn't value the formal air much at all.
"Maybe he wants to be the singer." I comment shortly afterward. 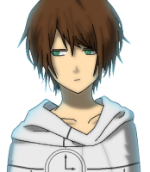 What an ass clown.

"Maybe he wants to be the singer."

Yeah right.
No sense of discipline or diligence, clearly.
He's a disaster waiting to happen.

"He may as well be. Nobody else seems up to the job." Hawke says with a shrug, and leans forward in his chair.

I keep my facial expression but my eyes look up and around at the ceiling.

"I know only one boy that would do that in a place like this..."

And the thought of him being the lead singer of a band made me kind of nervous for that band.

Sayuri can't stop herself from facepalming at Wade's latest antic. "This is going to be a long night," she sighs.

That does seen to be the case. And Wilson's not helping. Can't even get a few measly drinks back here in a timely manner.

"Maybe you should sing, Motozaki," Toshiaki said with a pensive expression.

He felt another twinge in his arm. And another.
Shit. Shitshitshit. This is gonna be a bad one.

"Excuse me a moment…"

He eased himself up from the table, clutching his right arm.
His face began to contort in pain as he made his way out of the room and disappeared out into the hall.

He shoved himself through the washroom door, his arm now contracting into an agonizing angle.

Damn it. Why do I have to deal with this here and now…
He stumbled to the sink as he fished through his pocket with his free hand. Finding a small syringe, he tossed it onto the counter.
Not that one. Opposite of what I need.
He searched again, finding a small manual ventilator. He likewise tossed it to the side.
Not that either.
Finding what he was after, he pulled off the cap with his teeth and plunged the short needle into his arm.

One hundred… ninety-nine… ninety-eight…
Setting the now-empty syringe back on the counter, he observed his pallid reflection in the mirror as he counted away. His heart was pounding and his breath came short and quick. The seconds seemed to drag on, magnified by his adrenaline-heightened consciousness.

Eighty-seven… eighty-six…
He ran cold water and doused his face, holding his breath.

Seventy-one…
His heart began to slow.

Forty-two…
He unclenched his teeth when the relaxant began to take effect. Turning off the tap, he began to breathe again, forcing those breaths to be slow and steady.

For a few minutes, he simply stood there, half-kneeled over the sink as his heartbeat and breath continued to slow. Eventually, he turned and dried his hands and face. He rolled his sleeve back down over his arm as it loosened and the pain started to subside.

Damn it. I know you're destroying yourself, but do you have to be so goddamn dramatic about it?
My own body, a traitor.
He snorted at the ridiculousness of it all as his heartbeat and breath continued to slow.

He worked his arm back and forth as he dried the water off the counter.
Eight minutes, he noted as he checked his watch. Better get back out there.

He capped the syringe and stood, just before the room began to swirl around him.
His eyes caught part of the label

Side effects may include… blurred vision, respiratory depression, hypotension…

just before he slumped to the floor.