On the Job (OPEN)

KS: The New Generation :: Roleplaying Area :: The City :: The Hotel

On the Job (OPEN)

Itsuki walked quickly down the street. He had his arm firmly against the package he carried under his coat. It was his first job for "the boss" and he intended to prove himself. 'And not get caught,' he added mentally. He nervously glanced around, hoping no one from the academy was around...

After the brief (unsuccessful) stint at The Shanghai, which ended in a shouting match between the manager of the establishment on the subject of Eric's gender; apparently the name "Eric" wasn't a big enough clue that he was indeed female, and apparently the Shanghai was sexist and only employed women, Eric once again found himself unemployed, without hope and without money. His searches sent him farther afield, and he found himself working on the front desk of a rather classy hotel in a city close to Townsville.

The work was menial, checking guests in and out, managing the cleaners, boring, boring, boring. He wore a suit and tie, and kept his usually wild blue hair in a neat comb over and was required to wear fake glasses to make him look more intelligent.

Just as he is now, he often finds himself staring out of the door wistfully, thinking back on where it all went wrong. He supposed the answer was Takeshi, but apparently that had never happened and it was some strange, obscure dream.

As he sits on this particular afternoon, his train of thought is suddenly derailed by a rather shifty character scurrying by the hotel, looking as if he had just committed murder.

Now THIS I can deal with... 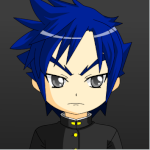 Looking around Itsuki noticed someone watching him. He stoppedand stared long and hard at the personto see whether or not he was being paranoid.

When Eric's gaze is met his expression doesn't move an inch: neutral, cold, and calculating.

Itsuki shuffled back and forth and saw the person's gaze follow him. He met the stare and shrugged in a way that seemed to say, 'Do you have a problem?'

The person before Eric moved back and forth, seemingly inexplicably. When the boy shrugged, Eric leaned forward towards a microphone, places his finger on a button and mouths the word "Security", and awaits the boy's reaction. It was clear he wanted to come in, but perhaps his motives would be revealed in due time.

He raises an eyebrow towards the boy, inviting him forward.

If you stayed out there security would surely apprehend you on the grounds of loitering... if they were coming. They'd take a look at that package, too. No doubt about that.

Itsuki felt his phone ringing and pulled it out his pocket, carefully holding the package with his arm, causing it to slip a little.

"Hello," he said. He nodded a few times and punctuated his silence with occasional, "Uh huh," and "Yes sir." Finally he hung up and managed to just barley get his phone back in his pocket without dropping the package.

He walked in to the hotel and up to Eric. "Hi, I'm here to see Takashi Kurokawa."

Similar topics
» [Open] Ol' 55
» [OPEN] firstdayofclassohgodthisisterrifyingsomeonehelpmeplease
» [OPEN] Where do I go?
» [Open] A Few Every Now And Then...
» [Open] Well Enough Alone

KS: The New Generation :: Roleplaying Area :: The City :: The Hotel